The Dallas Cowboys move forward with Andy Dalton as they take on Kyler Murray and the Arizona Cardinals in a Monday night encounter.

Betting tips for Cardinals at Cowboys

It is hard for BetOnline customers to talk about the Dallas Cowboys without zeroing in on Dak Prescott, who was having his most productive season yet before going down with an injury which might actually put his career in jeopardy.

One of the reasons is that it also creates a different set of circumstances surrounding his process of negotiating with the Cowboys for a new contract, if it ever gets that far. This season he was playing with the "franchise" tag that brings him a guaranteed $31.4 million.

Now they have to turn to a veteran quarterback who has a comparatively modest $3 million with $4 million in incentives available, should he be able to do some things that most people don't believe he can do.

And it does set up some drama for Monday Night Football, as the Cowboys play host to the Arizona Cardinals. It begins at 8:15 PM ET at AT&T Stadium in Arlington.

Prescott was at the helm of the league's leading offense. The Cowboys also averaged 32.6 points a game, but this did not necessarily translate to a winning record. With just two wins, they may be at the top of the NFC East division, but they have not covered a game yet. And one has to question whether Prescott running up all these numbers (he led the NFL in passing yards, for instance) was the thing that was going to lead to more wins.

Here are the Monday Night Football betting odds on this game, with the Cowboys a slight favorite:

Don't forget that you can get greatly enhanced payouts on pre-selected parlays with Odds Booster - every day!

It is almost inconceivable to people that a quarterback could throw for 974 over a two-game period and lose both games. But that's what happened to Dallas.

So you may want to look at a lack of balance in the five games thus far and suggest that perhaps they should be utilizing Ezekiel Elliott more. There is no doubt that Elliott is one of the premier back in football, but Dallas has run the ball only 33.8% of the time. Only Jacksonville's run play percentage is lower.

Maybe that will change with Andy Dalton at quarterback. He has been "high volume" before, but that was years ago with Cincinnati, well before he was pushed out by rookie Joe Burrow. There is definitely a positive with Dalton having a world of experience, and it does give the Cowboys a fighting chance in this division, because nobody is doing all that well.

But he is indeed a stationary target, and that makes him the opposite of Prescott. So we would have to assume that he won't be able to create as many plays. And we say that even after Dalton completed nine of 11 passes to help the team pull one out against the New York Giants.

Dalton's propensity to get sacked is probably a little exaggerated. But still, it is a concern that the Cowboys do not have the services of three offensive linemen. This includes the key pass protection people, as tackles Tyron Smith (an All-Pro) and La'el Collins, as well as center Joe Looney, are out. Remember that the Cowboys built their offense around one of the great offensive lines in football, and now it is a shell of its former self. And this makes you really appreciate what Prescott's mobility meant.

So Dalton may find himself behind the eight-ball.

As we're speaking of sacks, Kyler Murray suffered 48 of them last year, highest in the NFL. This year that figure is way down - he's suffered eight sacks for 27 yards in losses over five games. 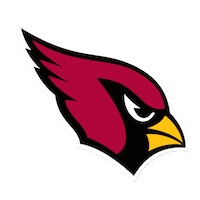 DeAndre Hopkins is BY FAR the #1 target, catching 45 passes. But there are a lot of options, including future Hall of Famer Larry Fitzgerald, Christian Kirk and Andy Isabella. And as you can imagine, Dallas' defense leaves a lot of room for the opponent, allowing a robust 47.9% on third down.

The difference between scoring a TD and having to settle for a field goal involves red zone performance. This is where Arizona ranks among all NFL teams in the red zone. As we can see, they're the best overall:

How many times have you seen a team that was best in the red zone on both offense AND defense? A margin of +2.18 points per RZ trip is virtually unheard of.

People laughed at the Cards when they hired Kliff Kingsbury and when he spoke of the Air Raid offense with Murray at the controls. But he has actually seemed quite prescient, as Murray won offensive rookie of the year honors, while Josh Rosen, who they traded to make room for Murray, washed out on his chance in Miami.
Oh, and Kingsbury, perhaps still underestimated by oddsmakers, is a cool 13-7-1 ATS.

Not that Murray has been lighting the world on fire, but let's keep in mind that he does lead the NFL in yards per rushing attempt at 7.2. He provides the kind of "dual threat" that Dallas has lost with Prescott's injury.

In this near-pick'em, we have to side with ARIZONA.

BetOnline is ready for you with action on BOTH Monday games! Not only do they have competitive pointspreads and totals, but also props of all kinds......... And you know what? If you are looking for some greatly enhanced payouts on pre-selected parlays, you need to check out Odds Booster, every day............. Deposit in all kinds of ways, including Bitcoin, and enjoy fee-free transactions!