NBA Summer League should be the no betting league

The NBA Summer League is just a step removed from the playground, yet lines are available for betting.

Many fervent bettors just can’t wait for August 1st.  That’s the calendar date of the NFL Hall of Fame Game, marking the beginning of the NFL preseason. Also noting 35 days of the most useless period to wager on a specific sport.  Sadly, some take it up a notch. Taking these two weeks in July to wager on NBA Summer League basketball.

Here’s a lock though. I will soon be writing the annual warning begging all sane bettors NOT to wager on preseason football. I’ll try to refresh it this time with some breaking evidence why no NFL team gives a crap whether they win or lose in August. Therefore, why would anyone bet on the scoring outcome of any event that is based on zero with little incentive but preventing injury.

But wait. Helping to support new legal books in the U.S. and many top online sportsbooks, all feature this even dumber, meaningless sport to bet upon. More irrelevant than pre-season baseball or considering Major League Eating a sport. And I don’t care how many young NBA stars will be featured. That’s the NBA Summer League.

No surprise anymore, there truly is betting on the NBA Summer League, which is strictly a showcase for rookies, second year players and a few left unsigned free agents. Here’s how it works: 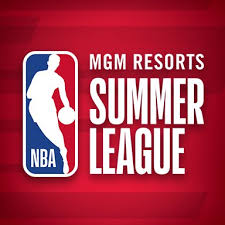 The league (if you could call it that) has one basic location now in Las Vegas. Historically, there hasn’t been much of an organized structure and not officially coordinated. In 2004, the NBA held the first Las Vegas Summer League. They even will hold a championship on July 15th because Vegas tourists will pay to see it live, I suppose.

Before the 2013 leagues, no official champions were named with the leagues focusing more on individual auditions and development. Team performance is not emphasized. That will give you an idea of "the quality of play" as it usually looks like a street or playground game.

Unsigned free agents are often signed to summer league deals, providing a chance to possibly be signed to a contract during the regular season. Any team can sign the free agent after the league is over, not just the one he played for in the summer league. That is how for example, an unknown Jeremy Lin became 'a star'.  Or at least for a little while and cashed in big a few years later.

The leagues generally consist of a handful of games per team. Unlike regulation NBA games, which are 48 minutes long, games last only 40 minutes. All 30 NBA teams participate, with this year two national teams added from China and Croatia. And if you’re wondering, yes, there is Totals (Over/Under) betting available as well at top offshore sportsbooks, including BetOnline, Bovada, 5Dimes and others. The shorter game partly explains why you’ll often see these Totals hovering around 155-175 points. In case you’re wondering, many of these books offer quarter and each half wagering options as well.

How they set the lines for these games seems bizarre and almost impossible. We’re dealing with many players who are facing their first NBA action on the court. Second, they’ve had virtually no coaching opportunity to learn any organized plays whatsoever. Throw in they’ve had no chance to develop any chemistry with their new teammates. Many who might be finished playing pro basketball or heading to foreign countries in a few months. Wow.

Again, I am not in any way endorsing betting preseason football. But at least most of the players have some NFL experience, many have played with each other previously and can get some direction of plays from the quarterback. Or on defense know their football assignments man to man or in a zone.  Except for the “high profile” first round rookies, many of these guys are fighting life and death to impress somebody whether scoring, rebounding or on defense. They couldn’t give a rip what the score was or winning the game. So again, why should anyone try betting on it.

Let me make this clear.  I fully DO NOT endorse risking a green dollar on any of these NBA Summer League games.  But if you must I would shop the preferred books offering action and play on either of the national teams from China or Croatia receiving the generous points. At least these guys must have significant experience playing as a team and look forward to these contests as an opportunity to prove their skills after traveling a far distance. Besides, I don’t envision them being caught in the Vegas hotel casinos partying all-night before the game or anytime during the afternoon practice session. Just a thought.

Girls are the Better Bet

I realize it’s tough getting through July and the dog days of August but y’gotta be patient. Betting NBA Summer League games is strictly desperation material. Plenty of real Major League Baseball games to consider every day and true regular season NFL wagering action is now only eight short weeks away.

And if you must bet professional basketball, why not bet the WNBA.  It’s certainly in vogue now following the success of the women’s U.S. soccer team huge World Cup victory. The lines are up at all preferred sportsbooks. Remember, the gals really do care about winning and already have their jobs secured.