NY and CA are prime examples of why all states don't have sports betting . . . yet

Hartley examines why just a handful of U.S. states have passed sports betting laws, despite the repeal of PASPA nearly seven months ago.

The state of New York has experienced a strange few years when it comes to Daily Fantasy Sports (DFS) regulation. After the DraftKings scandal of 2015, where employees were implicated for betting on events and for posting information before events were finished, New York Attorney General Eric Schneiderman declared that DFS was illegal under New York law and issued cease and desist orders against DraftKings and FanDuel. The companies ceased operations temporarily, but appealed the decision. New York legislators got involved almost immediately as they apparently didn’t want to lose the cash cow that DFS had become in the state, so they passed a new law in 2016 that gave DFS an exemption from current state gambling laws arguing that DFS is a game of skill and not real gambling. The new law had stringent rules attached to it and the majority of funds from DFS were geared to education. Governor Cuomo signed the bill and ordered DFS to be regulated under the direction of the New York Gaming Commission (NYGC).

According to rumored reports at the time, aside from not wanting to lose DFS revenue, he sensed that the majority of New York residents, along with New York sports teams, who had significant partnerships with the sites, were in favor of DFS legalization and there was a huge push from a trade group led by former NFL quarterbacks Jim Kelly and Vinny Testerverde to legalize it.  Schneiderman reluctantly agreed to enforce the new law although he still demanded compensation from both DraftKings and FanDuel for what he called deceptive marketing and advertising.

Not long after the law passed and before the final regulations were written, a group called Stop Predatory Gambling appealed the law and demanded that the state Supreme Court reverse the decision, since they felt it violated the state constitution and was passed without a referendum, which the constitution requires. The group’s board members are dominated by church groups and faith lobby groups like Focus on the Family, so clearly their objections had less to do with a concern over the constitutionality of the law and more to do with the protestant belief that gambling is evil.

In October the New York Supreme Court ruled that DFS is indeed illegal gambling, although the court also said the state had the right to give an exemption to DFS. This ruling has left most analysts scratching their heads and wondering whether it means DFS is permissible or not.

The New York Racing Association seems to be quarreling with the NYGC over how sports betting should be implemented (i.e. casinos vs race tracks) and also what percentage of the betting revenue should go to the state. Plus, the NYGC is still fighting with Native American groups, including the Seneca Indians about fees that need to be paid to the state for the right to operate the casinos. No doubt these groups will somehow want to include the revenue from sports betting as part of the agreement on how much, if anything, they need to pay the state for the right to operate their casinos. And while no lobby groups have come forward yet to challenge sports betting in the state, one knows full well that Stop Predatory Gambling, along with other groups, will challenge any attempts to implement it.

Unfortunately, this situation is not unique to New York. 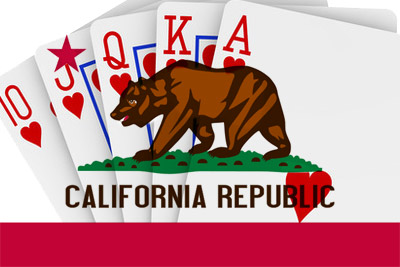 California has had infighting between the gambling commission, the racing association, Native American groups and the poker clubs over the right to offer online poker for years, and what seemed inevitable has been delayed now for over three years. Different government groups will not budge on their demands and the different tribes are fighting with each other regarding who the tribes should be allowed to partner with, and whether sites like PokerStars should have to sit on the sidelines for up to a decade. And despite this dragging on and all groups continue to lose potential revenue, there is no resolution in sight.

Even in the area of horse racing, infighting between the different interests has blocked the introduction of exchange wagering. As one California analyst said to me "the only thing the state interests can agree to is to disagree." And in the state of Florida, fighting between the state government, the different counties and the Native American groups has led to a situation where there is arguments over where slot machines and banked card games can be played. Plus, the construction of a major casino in Miami is on hold while the courts settle a dispute over whether the county’s rights supersede the rights of the Tribes to offer slots as they see fit. So certainly, legalization of sports betting will need to involve all interests there.

I spoke to someone associated with Native American Gaming groups that I met at a gambling conference and he made it clear that any changes to existing gambling laws in states where the Indian Gaming Regulatory Act (IGRA) is in place are going to have to be approved by the tribes before they will ever be enacted. At the time, when internet poker was the big topic, I asked if the same would hold true for sports betting. Here was his reply.

"The IGRA is federal law and the states have signed compacts with the tribes in good faith. If PASPA was ever repealed I can assure you that the vast majority of tribes would agree to the expansion of gambling, but only if it suits their needs as well. Nothing is free. Most states can solve any concerns by restricting sports betting to Tribal casinos, by offering compensation equal to the amount that tribes would get in such an agreement if only race tracks or non-tribal casinos could offer sports betting, or by amending the compacts to reduce the amount payable to the states for existing casinos. But one thing I can say for sure is that Tribal groups will demand and will get their fair share."

I also spoke to someone in the racing industry about sports betting a couple of years back and he said something similar:

"A senior government official suggested to the Industry that we give up some of our rights we fought for under the IHRA (Interactive Horse Racing Act), when they were in a dispute with another country and we said 'over our dead bodies'.  We feel the same way about sports betting, including daily fantasy sports. It’s an obvious extension of our business and we know we are the best option to maximize revenue, but we are also reasonable. I’m certain most in the horse racing industry are willing to share any sports betting revenue with casinos, especially in communities where there are no tracks, but we will not be shut out. If any state tries to legalize any form of sports betting at casinos only or online, we will fight that decision tooth and nail."

One analyst I spoke to recently, about a month after the repeal of PASPA, and the subsequent offering of sports betting in New Jersey and Delaware seemed prophetic in his comments at the time.

"Just because SCOTUS repealed PASPA, you’d be crazy to expect wide spread sports betting immediately. New Jersey and Delaware were easy because only one government agency makes all gambling decisions. In New Jersey it’s the DGE (Division of Gaming Enforcement) and in Delaware it’s the lottery. The issue going forward won’t be with state legislators, but arguments between government agencies where each think their interests are paramount. It’s the old cliché of too many cooks spoiling the broth. My guess is that any state that has one entity making all gambling decisions will either choose to offer sports betting as they see fit or not at all. For that reason, I suspect West Virginia, Rhode Island, Michigan, Pennsylvania and maybe Mississippi and Colorado will implement sports betting right away, but other states will take longer and for some it could be years. California and Illinois will almost certainly be bickering for years and even New York will probably take a while to implement anything, since there are different agencies at work there. And states like Texas, Alaska, Wyoming, Utah and Hawaii will say no thanks to sports betting and will see no need to even discuss it. I kind of equate it to bringing home a toy. If you have one child it’s not a problem, but if you have two kids they’ll argue about who owns it and who gets to use it when. And if you have multiple kids it will just be a melee."

So, sports betting is now legal throughout the U.S., but as can be seen with New York, that hardly means that it can be implemented right away, especially when multiple agencies are involved and are all arguing their case. This is the rule in the U.S. rather than the exception, so the tidal wave of sports betting implementation hasn’t taken place. There has been a push by some legislators for federal sports betting regulation which would resolve a lot of the infighting, but that is unlikely as the majority of states will not want to relinquish their autonomy. Expect more states to slowly implement sports betting over the next few years as disputes are settled, but if you live in California, nothing may be resolved in this lifetime.