Many experts predicted a decline in sports betting revenue in Las Vegas once states passed laws and opened up sports wagering, but the opposite has occurred.

When SCOTUS repealed PASPA, a couple of sports betting analysts predicted doom and gloom for Las Vegas. Those analysts believed that if people could stay closer to home to bet on sports, they wouldn’t travel to Vegas to place their wagers. This in turn they believed would affect wagering in Nevada. That, however, has not turned out to be the case.

In May and June of last year $602 million was wagered on sports in Nevada, while in 2019 that number was $638 million representing a 6% increase. And while the most recent official numbers aren't out, it is believed the increase in July of this year over last is even more significant. Obviously, that only represents 2 months (SCOTUS only repealed PASPA in May 2018), but it is still telling. Up until July of 2018 only Nevada, New Jersey and Delaware had legalized sports betting, so the end of year figures in 2019 will be far more telling since Mississippi, Pennsylvania, West Virginia, New Mexico and Rhode Island offered sports betting throughout the year. Not all analysts agreed with the naysayers, however, and one analyst, John Ross, suggested to me right after the repeal of PASPA that Nevada would see an upswing.

"As a rule, people go to Vegas as a vacation or to attend a convention. There are a lot of professional sports bettors in Nevada, but this ruling won’t affect them. I believe the change of law will actually create an increase in sports betting in Nevada because simply put more people will be following sports and will be handicapping games knowing they can now bet on it at home or in a neighboring state. And as more states introduce sports betting, the appeal of betting shops in Nevada will have to improve. 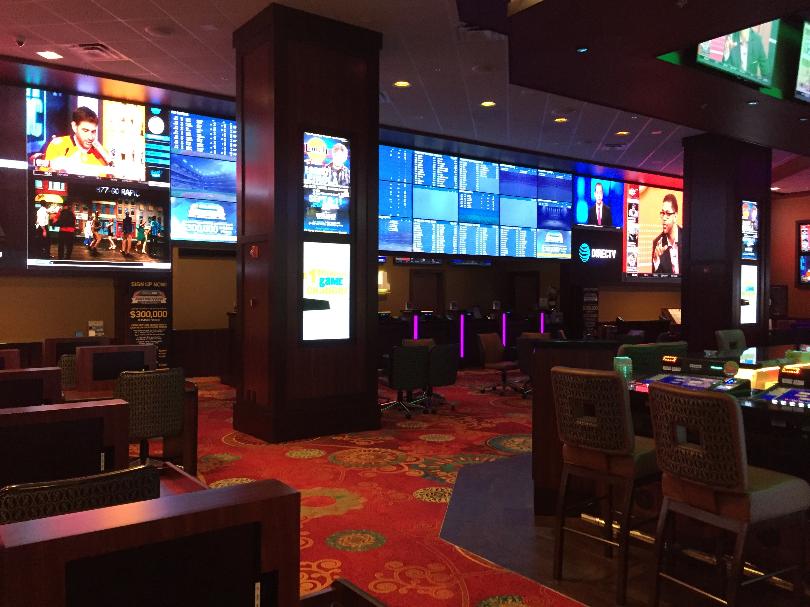 In Nevada sports betting has always been viewed as a loss leader of sorts. The sportsbooks make money, but the profit is so small that it represents a loss to what could be made if the space a sportsbook takes up was used for slot machines instead. So, sports betting lounges in Nevada have become smaller, the product really isn’t promoted, and most non-professionals avoid the smaller sportsbooks because they are seen as dreary. That wasn’t always the case.

Two decades ago, people flocked to Vegas to bet on sports because it was an experience especially for big games like the Super Bowl, for New Year's day bowl games or for March Madness. Consequently, the sports betting lounges were extravagant theaters and were the centerpiece of most casinos. So, as sports betting is legalized elsewhere, I have no doubt there will be an increased demand for sports betting in general which will extend to Vegas as part of vacations and conventions and we will see far more interest from casinos in promoting the product. Any real sports bettor will tell you that you can't replace the atmosphere and excitement of watching and wagering on the Superbowl at say the Westgate, especially when compared to a small group and screen at say Monmouth Park Raceway. It may sound crazy, but it happened with online gambling too. As states started legalizing online gambling, Nevada saw an uptick in visitors and casino play. The reason is that people who didn’t think about gambling when it came to vacations now have it on their radar and what better place to go for gambling that sin city."

John said he expects the numbers to explode everywhere, including Nevada as more states pass laws allowing for legal sports wagering. Other experts also note that as more states legalize sports betting it provides some options for comingled pools and contests that can be played in all states, which will attract casual sports followers who aren’t interested in wagering on an individual game, but are very interested in say, a $5 million pool. By rules of the UIGEA all wagering must take place in-state, but states can argue that the commerce clause allows for states to offer cross state pools and contests provided the bet is still made in the resident’s state. And two lawyers I asked both agreed that the states would almost certainly win that case although it would never get that far since It’s unlikely federal courts wouldn’t try to block it anyways. 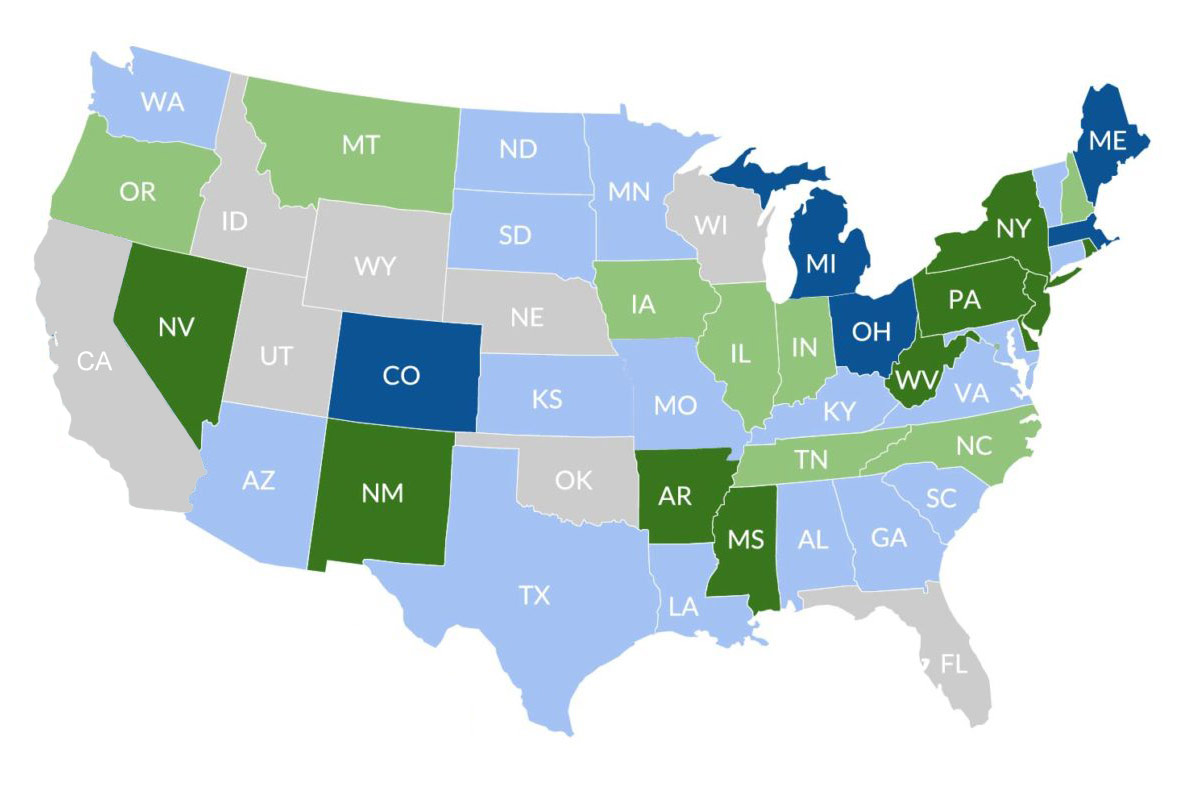 As for the other states, bills have been introduced and most experts expect legal sports betting very shortly in the following 13 states - Colorado, Connecticut, Kansas, Kentucky, Maine, Massachusetts, Michigan, Missouri, North Dakota, Ohio, Oklahoma, South Carolina, Vermont and Virginia.  Louisiana, Maryland and South Dakota will almost certainly legalize sports betting as well, as long as it passes the state mandated referendum.  That leaves 15 states that are up in the air. Alabama and Georgia have introduced a sports betting bill although most experts feel they are a long way off from actually passing a law given the nature of the states. In fact, Georgia has no forms of gambling, so why they would offer sports betting makes little sense. Alaska, Hawaii, Nebraska and Utah are pretty much 100% guaranteed not to legalize sports betting since in each state gambling is illegal. And in Wyoming, Idaho and Texas it is pretty much a given that the states are at least a decade off from even a consideration to sports betting.

So, what about the remaining six states, namely Arizona, California, Florida, Minnesota, Washington and Wisconsin? I asked a few experts and they pretty much all agree that it comes down to the tribes. The tribes in Arizona and Minnesota apparently have no interest in offering sports betting because they do not want to have to change compacts and both Washington and Wisconsin technically have laws that make it illegal to gamble on the Internet, so online sports betting would never take place in either state. But in both of those states, along with California and Florida, there is infighting between the state and the tribes over who will benefit.

Anyone following gambling in California is likely aware that the state is at an impasse over poker because the various tribes disagree with each other over which poker sites would be allowed to operate and to what extent each tribe would benefit. The horse racing industry finally conceded to allow the tribes to run the poker sites in exchange for a cut of the profits, but it is very unlikely they would do the same for sports betting. The Stronach Group has made it very clear that if sports betting comes to California they want the right to offer the product at their racetracks while the tribes have made it clear that they will only agree to sports betting if they have the exclusive rights to offer it at their casinos and the revenue to the state is no different than with other forms of gambling. As a result, there is an impasse and there is no indication that will change.

The same holds true for Florida. The racing industry in Florida wants the rights to offer sports betting at horse and greyhound tracks to help bolster interest in those products, but the tribes have dug their feet in and said they will not agree to sports gambling that is not tribally controlled, at their casinos. Given the option of no sports betting or allowing the tracks to offer the product the Seminole tribe said they were happy with the status quo.

So, we are at an interesting point with regards to sports betting. There has been a deluge of states legalizing and/or launching sports betting over the last few months, as well as states introducing bills to seriously look at offering sports betting. Conceivably 7 out of 10 states will have sports betting very soon and fortunately for the state of Nevada it appears this new interest in sports betting has not cannibalized their action and profits, but instead has enhanced it, as people look to places to gamble for destination vacations. This is indeed an exciting time for sports bettors and for the U.S. gambling industry in general.