Amaya's former CEO David Baazov, along with several other people connected to the company, are on trial in Canada and this latest scandal involving PokerStars is not helping them expand in the U.S.

Ever since Amaya Gaming purchased PokerStars the company has been trying to get over being labelled a "bad actor". Nevada legalized online poker but issued a 5-year ban on PokerStars entering the market as a result of the company operating in the United States after the passage of the UIGEA. In New Jersey the company was originally banned from operating there because of their actions after 2006, but they eventually were given an exemption after the company was bought out by Amaya Gaming for $4.9 billion. And now in California the fate of Amaya and PokerStars is being contested by the state legislators and the Tribes. Most Tribes and legislators that have no connection to PokerStars want at least a 5-year ban on the company (some Tribes want them banned forever) while those that have a partnership with the company believe that there is really no reason to ban them at all since it's "a different company." And undoubtedly as other states start looking at legalizing online poker the same discussion will occur there too.

The complication with PokerStars, whether it's the company or the management that is relevant, has to do with the distinction between covered assets and covered people. PokerStars was originally founded in 2001 by Isai and Mark Scheinberg and was run by them until 2011 when the infamous Black Friday raids and seizures occurred. Along with seizing the website and cutting off access to Americans, the Department of Justice (DoJ) also issued charges for money laundering and bank fraud against numerous individuals connected to Black Friday, including Isai Scheinberg. At that point Scheinberg stepped down as CEO, but maintained an ownership in the company. In 2012 PokerStars paid a fine for their involvement and also bailed out the DoJ by purchasing Full Tilt Poker and in return the DoJ dismissed, with prejudice, all civil complaints against PokerStars and Full Tilt, thereby ending all active legislation between the feds and the company. But, the charges against individuals, including Scheinberg, remained in place. The company overseeing the new PokerStars and Full Tilt product was renamed The Rational Group. 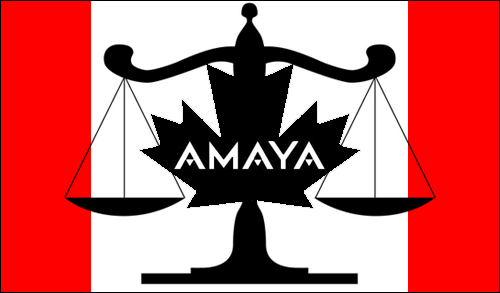 Despite the company being exonerated by the Feds, the states were not so quick to forgive and when PokerStars applied for licenses in Nevada they were informed that they had to pay a penalty for their involvement in the U.S. after December 31, 2006 and have been put on the sidelines until February 2018, when they can apply again. In New Jersey the company was thwarted at every attempt to enter the online poker market including purchasing the now defunct Atlantic Club Casino, which was required for a license, since all licensees had to have a physical Atlantic City location and in California it was clear that no Tribe or legislator was willing to provide a license to PokerStars in its current form. Seeing the writing on the wall the Rational Group finally decided to wave the white flag and sold all the assets in the company to Montreal based Amaya Inc. for $4.9 billion. All old management were gone from the company, with no involvement in the new company, and Amaya's CEO David Baazov seemed to be in good character. The new ownership reapplied in New Jersey arguing that this was a new company and since their complaint was against Scheinberg that new management should not be held liable for the actions of past management. That was enough for the New Jersey Division of Gaming Enforcement to drop its concerns against PokerStars, since their issue seemed to be regarding the lawsuit against Isai Scheinberg (i.e. covered people) rather than the company itself. So in March of this year PokerStars started operations in the state. In California, however, they are still only looking at covered assets, so the new ownership is irrelevant. Not surprisingly the Morongo and San Manuel Tribes that have a partnership with PokerStars as well as the poker rooms that have a partnership with them want the state to look at the people rather than the company name itself.

The case in Quebec started in 2014 when the Autorite des marches financiers (AMF), the Quebec version of the SEC, along with the Royal Canadian Mounted Police (RCMP) marched into Amaya's offices and seized computers and files from Amaya and also paid a visit to the offices of Canaccord Genuity and Manulife Financial who they believed may have somehow been involved in the case. There were indications that the AMF and RCMP were looking into insider trading as a result of a surge in trading and an increase in the share price of Amaya on the Toronto Stock Exchange shortly before the purchase of PokerStars by the company. The investigation wrapped up after almost 2 years in March of 2016 and the AMF laid 23 charges against Baazov, Benjamin Adhoot, a former staffer now acting as Vice President of the company and Yoel Altman, an advisor to Amaya for insider trading. Baazov has been charged with influencing the stock price and communicating privileged information, while Adhoot and Altman have been charged with actual trading while in possession of privileged information.

"With all the evidence against Baazov and others connected to Amaya it's hard to see any legislators just dismissing the issue as unimportant . . . "

At first Baazov was prepared to just sit idly and let the chips fall where they may, but Baazov decided to take a leave of absence as CEO of the company in March (likely on the advice of lawyers) to deal with the charges. Rafi Ashkenazi, a former Playtech stalwart took over as interim CEO, but in August Baazov issued his full resignation and there are rumors that the company may be looking to sell to new interests.

Baazov has pled not guilty and last week the first case against Baazov and others was held. The AMF seems confident it has the necessary documentation to get the charges upheld although La Presse suggested the case may be in jeopardy because the AMF failed to secure Baazov's mobile phone in time.

According to the article, the phone had much of the information required to complete the case against Baazov, but by the time they seized it the phone was changed:

"We realized that the phone David Baazov had had been changed after the first raid on the headquarters of Amaya (10 December 2014). So the content of the messages and telephone conversations could not be recovered."

It's possible that without the phone in tact the case against Baazov may be too circumstantial to win but in the end that may not matter. Whether or not the case against Baazov is successful or not, this puts a new wrinkle into PokerStars' attempts to get licensed in further U.S. jurisdictions, including California. Amaya's arguments for the last 2 years have been to not judge them on the failings of its former owners because the new management is above reproach. But now the new ownership (or at least the ownership at the time of the purchase of PokerStars) has been called into question. Insider trading is a felony in both Canada and the United States and with all the evidence against Baazov and others connected to Amaya it's hard to see any legislators just dismissing the issue as unimportant.

Don't forget when PokerStars first applied for a license in New Jersey the American Gaming Association told the New Jersey Division of Gaming Enforcement not to allow them to purchase the Atlantic Club Casino because they were still bad actors and regardless that the feds exonerated the company, it didn't change the fact that Isai and Mark Scheinberg were not upstanding people in their opinion and providing them a license would be a mistake. And in California the Tribes have argued that perception is as important and whether Baazov is eventually let off the hook and the company is exonerated by the AMF, there is still far too much baggage and indications that he is guilty and the Tribes want to ensure that California Poker Players are under no threat of being corrupted by bad actors. And like it or not it appears that far too many people connected to Amaya when the purchase of PokerStars was made had illegally benefitted from knowledge of the purchase ahead of time.

One thing is certain, the ongoing charges and leaking of information relating to the case against Baazov and the others is not helping Amaya in its attempts to get licensed in further jurisdictions.

The next hearing for Baazov takes place on October 4th.