Soon a Sportsbook Partner will be Mandatory for NFL Teams

After both the Giants and Eagles signed big partnership deals, all NFL teams will want some of that sportsbook honey.

The news this week in the NFL about both NFC East teams, the Philadelphia Eagles and the New York Giants making major deals and partnering with prominent sportsbooks made some significant news.  But relatively speaking, ask yourself a few years ago to read those headlines and it might be akin to blackjack is now twenty-two or the Detroit Lions won the Super Bowl. What’s next?? Donald J. Trump as President of the United States?

Oh, he is President and could be for four more years.

The point is ANYTHING is possible and soon every NFL football team with sports gambling within their state will have a detailed alliance with a major sportsbook (or two) to co-brand and help build revenue opportunity for both sides. Only four short years ago, not only did that seem impossible, but the ultra-staunch and conservative NFL was funding legislation and lobbying to ensure it would never have it happen.

On Valentines Day, February 14th, 2016 I sat inside the Third Circuit Court of Appeals in Philadelphia listening to the NFL lead the way to support federal law under both PASPA (the Professional and Amateur Sports Protection Act of 1992) and the UIGEA (the Unlawful Internet Gambling Enforcement Act of 2006). Valentine love was not in the air that morning nor a prayer that we would ever see the day sports wagering would be legalized within the U.S. outside of Nevada.

If Bovada, Heritage Sports or YouWager had to put up a line for PASPA reversal it might be neighboring No (-10000). Only a fool would have taken Yes at +7500.

Ironically, one of the judges was President Trump's sister, retired U.S. Federal Judge Maryanne Trump. She had a scowl on her face that seemed to frighten the other two judges and a look meaner than Bill Belichick down by two touchdowns at halftime. 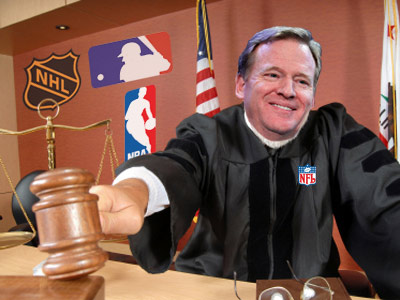 Despite compelling arguments from both sides, the NFL's powerful attorneys combined with the government appointed legislators ruled the courtroom. Many of the CEOs from major U.S. and international sportsbooks you read about today were in attendance. In unison, they all walked out looking defeated but still determined to find a way to somehow show the NFL the reality.

The reality of the millions of dollars wagered on NFL football each season. The obvious pluses they would gain by adopting cooperative sponsorship, along with the incremental millions of tax dollars raised for states put to imperative causes.

Still mired in the "integrity of the game" issues along with behind the scenes political causes, it seemed like the debate would continue for ten more years. Maybe that -10000 mythical prop bet was good odds.

Flash forward to this Sunday and it seems like we cannot go five minutes on any NFL game without a DraftKings or FanDuel commercial or bottom of the screen odds feed. Although not officially embracing it, the NFL is "first and ten" accepting the marriage for any team with a sportsbook.

For the Eagles, it included a new 'interactive studio' at Lincoln Financial Field following a multi-year sponsorship deal with FOX Bet. Fox will become an official partner of the Eagles and the studio will carry the FOX BET brand. The new studio will feature content panning across multiple platforms presented by the firm.  And this was not the first casino related deal the Eagles have signed. Last October, the Eagles and Unibet, a global online gambling operator, announced a multiyear partnership that made Unibet an "official casino partner" of the team.

Their deal with DraftKings makes them "the official sports betting and daily fantasy sports partner", allowing the company to access team trademarks and logos as it looks to continue building its gambling brand. All financial terms of the agreement were not provided.

Within an interview with CNBC on Tuesday, DraftKings’ Chief Business Officer Ezra Kucharz described the deal as a "multisegmented relationship." The company will also have exclusive digital gaming rights and access to the team's virtual sports lounge at MetLife Stadium on game days, once fans are allowed back in stadiums.

In translation, replacing those cardboard cutout heads you see on the seats will probably be DraftKings logos, often visible with other DraftKings signage throughout the stadium during television coverage.

Waiting on a Higher Judge

Another interesting mythical prop wager to consider suggesting to any of the top online sportsbooks: When will esteemed NFL Commissioner Roger Goodell ever come forward to officially announce his blessing upon legalized sports wagering for the NFL, either in public appearance or perhaps some kind of worded PR statement.

We now have as many as six NFL teams signing lucrative sportsbook agreements. Besides the Eagles and Giants, they include the Ravens, Cowboys, Jets and Raiders with many more to come. It will be mandatory for every NFL team that houses onsite and online sports wagering within their state to marry a prominent sportsbook operator. The money is too lucrative and the mutual benefits simply too good to avoid.

The question is WHEN and IF conservative NFL Commissioner Goodell will join his fellow commissioners from MLB, the NHL, and certainly Adam Silver from the NBA, in endorsing the reality and positive cause of sports wagering.  The new digital technology protecting "integrity".

Is he still afraid to come out of the closet? Or is he just too embarrassed someone will run an NFL highlight reel of that Valentine’s Day in the courtroom only a few years ago?