Will the NFL Ever Endorse Sports Betting?

With the NBA, NHL and MLB financially onboard, will the NFL ever give-in joining the trend backing U.S. legalized wagering?

Alright, the Stanley Cup has the Blues and virtually no one in the U.S. forecasted the Toronto Raptors to be NBA champs.  Horse racing’s Triple Crown is official though nobody really remembers who won. Tiger is back winning the Masters. Therefore, besides the World Series there’s only one huge 2019 sports question to be answered now.

Will the NFL shock the world and finally endorse U.S. sports betting?

Only a year ago a mythical line at any of the online sportsbooks might have been 100-1. Now with pre-season about six weeks away and the regular NFL season about two months from kick-off, it would be tough to put up an adjusted number. And if so, I’m not so sure taking any longshot odds on YES would be such a foolish bet. Here’s some legit reasons why:

Two years ago, the NBA and foresighted commissioner Adam Silver were leading the charge alone, advocating the beneficial potential between U.S. legalized sports wagering and basketball. Though his initial plea for a 1% "integrity fee" was financially exaggerated, he directed the NBA's stance deserving a cut of the action for providing the entertainment source.  Silver wisely partnered the NBA with industry software firms including Sportradar and BetGenius ensuring that integrity for the game. Integrity being a comfort term substituted for anti-cheating or any potential scandal possibility that could severely hurt not only the NBA, but their new legal casino partners as well.

Meanwhile, Major League Baseball sat in the dugout with a neutral stance during the early phase of legalized U.S. sports betting (June 2018).  Their commissioner, Rob Manfred, seemed to give it a lukewarm approval, but not an enthusiastic notion that MLB sought any aggressive marketing or revenue opportunity. 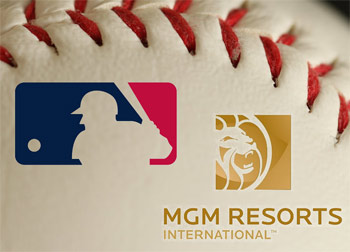 That all changed right after Thanksgiving when Major League Baseball became the next U.S. sports league to formally partner with a gaming operator and Manfred announced a multiyear deal with MGM Resorts International.

The partnership announced MGM as the first official gaming and entertainment partner of MLB. Most significantly, MGM sportsbooks would begin to utilize baseball's official statistics feed and have access to enhanced stats on an exclusive basis. In addition, MLB intellectual property, like league and team logos, would appear in MGM advertising and at the company's sportsbooks. MGM advertising and logos would also have a presence at the All-Star Game and World Series. Talk about a new batting stance or pitching motion. Wow.

Manfred went on to explain it this way. "There has been a huge change in public opinion and the whole legal framework surrounding sports gaming and I think it has presented an opportunity for all sports and baseball specifically. Our research is really strong on the idea that sports gaming is an important source of fan engagement and we operate in a competitive environment. We have to take advantage of every opportunity to drive engagement by our fans."

Translated, that means that the commissioner realized that baseball has become too slow for a growing young audience quickly becoming introduced to eSports and mesmerized by cell phones. "Fan engagement" also being a new term meaning people needed to BET on baseball to enhance their interest. The giant payoff was demanding a hefty fee for their MLB data feed in exchange for any casino’s partnership.

Flag on the Play

Given the aggressive moves by the NBA, MLB and the NHL this year we might assume the NFL joining the party accepting U.S. sports wagering. Seeking creative fees to add revenue, we might expect the NFL is next, pursuing millions to come onboard.  But first, let’s go to the replay and the cluster mess of NFL rule book policies and issues that cloud any giant announcement coming up soon.

What might push the issue is the Oakland Raiders soon relocating to Las Vegas in 2020. At that point thousands of people will be wagering on games merely yards away from inside the team’s proposed $1.8 billion-dollar stadium.

While NFL owners almost unanimously voted upon the idea of moving a franchise to the sports betting capital of the world, an ongoing court case in Texas raises further questions the NFL's stance on the business of gambling. Bizarrely, that involves daily fantasy sports, not traditional sports wagering.

It began in 2015, when a company called Fan Expo scheduled its inaugural National Fantasy Football Convention (NFFC). A three-day event planned to bring folks from fantasy football and real-life football together in Vegas. Nearly 100 NFL players planned to appear, including Odell Beckham Jr, Rob Gronkowski and Tony Romo, who had a personal stake in the company.

Five weeks before the event, the NFL had an "abrupt change of heart," according to a legal filing. The league informed personnel that attendance could be in violation of its policies on gambling associations.

In a recent filing, the NFL cites that policy in full. They include: League personnel may not accept bribes or fix games, nor may they share confidential information. The policy prohibits betting on all sports and visiting any sportsbook during the NFL season.

Even more troublesome to how the NBA and MLB have stated their new policies, the NFL also dictates how personnel should handle what they called these "gambling associations." What is strictly prohibited includes:

- Promoting a casino, sportsbook, or tout service
- Participating in promotional events held at or sponsored by a casino
- Accepting comps from any casino

Recently after an NFL owner’s meeting there seemed to be some progress toward relaxing the rules, allowing teams to partner with casino companies. However, clearing up this small case could be relevant toward any movement involving players as well.

Strike One and They’re Out

Don’t think for a last second field goal that NFL players aren't also reading the recent news and could take full advantage of the NBA, MLB and the NHL’s more liberal stance.  It’s their big play in the huddle toward avoiding any potential strike next year.

The current 10-year deal between the NFL and NFLPA will conclude following the 2020 season. There are some huge issues to decide, including ending the ban on cannabis, plus more guaranteed money for contracts between players and teams.

Jason La Canfora of CBS Sports noted Monday that the expected wave of legalized gambling in the United States could be the biggest key to getting a deal hashed out within the next year. He said that the league views legalized gambling as "a multi-billion-dollar game-changer that could spike the cap and salaries in the new CBA."

Following up he wrote that "many owners are beyond ready to dive in with both hands and embrace all of the revenue streams that could come with it." Talks between the NFLPA and the NFL have already begun, which could be viewed as a positive development.

Predicting IF the NFL will finally endorse legalized sports betting is not really a debatable issue anymore. The unknown factor is WHEN. And sadly, how many millions of dollars it’s going to potentially cost. Most important, WHO is going to eventually pay for it?  Hint: Think personal seat licenses or your monthly sports cable charge.

An NFL online sports betting fee?  I promise I won’t suggest it at the next NFL owners meeting.