CashBet Slow Pay and No Pay

CashBet has multiple slow pay reports and refuses to pay or answer inquires on these complaints.

Blacklist Notes: CashBet.ag opened in 2020 as a small sportsbook in Costa Rica utilizing the Price-Per-Head model. They started out seemingly okay, with almost zero problems in their first two years. But, like many newer sportsbooks, CashBet ran into some slow pay problems. When we initially heard about the book we did a little research and found only that they were new. It was very tough to see who was behind the book, but we received mixed feedback, some good, some bad, via our chat and help desk.

Fast forward to the last month or so and the complaints have streamed in.

Players have been contacting us letting us know about slow pay - Cashbet was only paying out $1000 a week. One player indicated that he was basically ignored for his payout requests. We reached out to CashBet via email and received no response, always a red flag.

Specific Notes: OSGA was first contacted by a player at the beginning of December who was being slow paid. The player asked for payout of the 1K max, and the money was removed form his account, but no payout ever arrived. The player added, "I’ve seen $0 so far in two weeks," and as far as we know, he is still waiting. Similar complaints continued in December, "I've had 7 weeks of excuses from BTC processors down to sorry about the delay and I've received nothing." 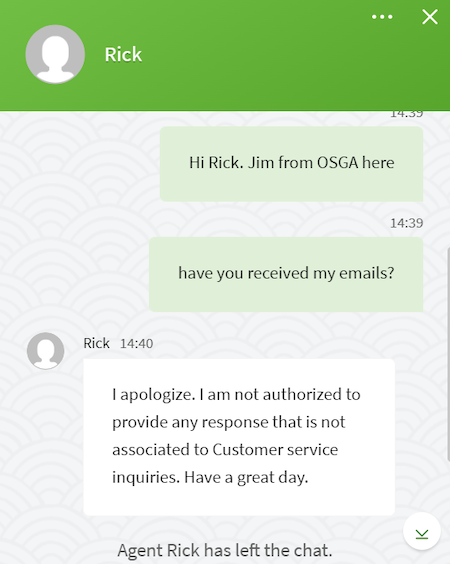 We have tried to contact CashBet via email several times, and have sent an inquiry for every person who has had a problem getting paid to every email address available for CashBet. Crickets! Nothing has been sent back to us. We also tried their chat only to be told by "Rick" that he could not answer any questions for us. The surprising thing is that our investigation of this rogue sportsbook determined that a "Rick" is running the operation at CashBet!

We also recently contacted their price-per-head provider to try to get information on the book and to urge the provider to have CashBet answer our inquires and tell us their side of the story. The provider for software, call center and betting services, BetFastAction.ag, did get on the phone with us, but was not very forthcoming with any information that could help players. When told that CashBet was basically stiffing players and we had multiple complaints on the book, BetFastAction told us that there was nothing they could do. CashBet had explained to them that these were 'sharp players' and they were being paid $1000 weekly. This is obviously not true, at least according to our inbox and chat.

Many people in the industry are aware of Rick and most do not speak highly of him. We were told that he is using a huge stolen list of gamblers and calling players to get them to sign up and fund accounts. It has also ben rumored that our old friend Rodrigo Castro is involved with the book, again using "Jeff" from defunct stiff books BetMayor and Wager506.

Ultimately, this leads us to a Bad Bet alert on CashBet.ag and a continued question about how this place was able to operate for nearly two years without any complaints.

We are recommending that players simply avoid CashBet and Rick altogether.