Now out of the shadows, the world’s sexy new subject was front and center for all to see in Las Vegas.

Before even setting foot for another G2E (the Global Gaming Expo) in Las Vegas this week, I confidently knew this year would be somewhat different. Beyond the Disney-like presentations of new slot machine gaming from mega-giants including Scientific Games and IGT, a new gambling force had overtaken the Sands Convention Center. The advent of U.S. legalized sports betting. Not only its impact upon gaming but on our American society as well.

The fact couldn't be disputed as the first speaker taking the giant celebrity stage was former New Jersey Governor Chris Christie. Taking full credit for bringing licensed and regulated sports betting to the United States and helping to "defeat the evil forces of illegal wagering in society."  His speech was entitled "How New Jersey fought the U.S. Government and Won."

He did make several good points during his entertaining talk, including the necessity for sports betting to include internet wagering. He let us know that New Jersey certainly continues to appreciate the staunch stance of New York to not include internet wagering for sports bettors.  And that neighboring sports bars in Hoboken have been advertising "enhanced WIFI" to make sure players have every opportunity to bet games should they not visit nearby sportsbook locations in the Empire State.

While I futilely waited for Governor Christie to acknowledge and give credit to a few other crucial heroes involved including crusader Senator Raymond Lesniak of New Jersey, I debated approaching the microphone following his speech with an intriguing question.

Since New Jersey spent a great deal of the TAXPAYERS MONEY on fighting the National Football League, when will the NFL formally put out a statement endorsing US sports betting?  Now that the Supreme Court has ruled to repeal PASPA (the Professional and Amateur Sports Protection Act) in May 2018), when will they swallow their pride and apologize to their supportive fans?

This is a very relevant subject as each day as we read about a new professional team signing a deal with a casino conglomerate. Starting about a year ago with MGM and William Hill and then followed by deals involving the Philadelphia 76ers, New Jersey Devils, Los Angeles Rams, Vegas Golden Knights many others, it is not surprising any longer to read articles interspersing gambling and sports teams. And a few now include NFL teams.

ESPN willfully scrolls wagering info and lines bordering their telecasts. New handicapping shows outnumber pre-game shows. It's not tabooed any longer to hide gambling references during the games themselves. I thought I might rile Governor Christie a bit if he thought Commissioner Goodell might soon be joining him at G2E with a microphone. Unfortunately, I didn’t get my opportunity.

Fatefully, I almost got my question answered by a much, much more informed source the next morning.  While taking a bathroom break, I ran into a very familiar and famous sports figure in the men's room. 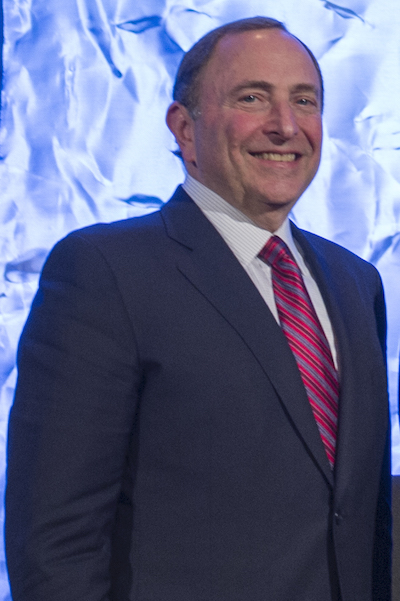 Yes, it was none other than the commissioner of the National Hockey League, Gary Bettman. Commissioner Bettman was about to join an esteemed committee including the CEO's of William Hill, Fan Duel and Rush Street Gaming to discuss how the NHL has proudly embraced U.S. sports betting legislation and will be joining forces to help improve the integrity of the game for fans.

I thanked Commissioner Bettman for his proactive posture toward the issue joining the NBA's Adam Silver and Major League Baseball's Rob Manfred. I posed the question, "What would the odds be that the lone (and most significant holdout), Commissioner Goodell might be at G2E next year pursuing a similar goal?"

He just smiled and laughed a bit. I didn't expect any committed answer or opinion. I knew I had a better chance of putting a lock on this Sunday's night’s Eagles-Cowboys game.

The Casino is Now Everywhere

While cruising the aisles I enjoyed meeting another well-qualified expert to field my curiosity question about the NFL's rather hypocritical posture. Hall of Fame kicker Morten Andersen, who represents global affiliate gaming behemoth Better Collective, a company that now is dominating U.S. iGaming, recently acquiring popular sites including VegasInsider, RotoGrinders and ScoresAndOdds.

Again, I asked Andersen about the NFL's current and near future to publicly announce their open affiliation to support U.S. legalized wagering. He assured me that important meetings are taking place, walls are being broken down and it would not be surprising to soon learn of MORE significant and officially announced plans to back efforts than the other three leagues. Stay tuned.

By October 2020 we may see as many as half of the states in the U.S. approving licensed and regulated wagering for sports. With that visibility it will bring not only an immense focus on the casino industry, but opportunity for many new companies to appear supporting a very, very overdue sector. Everybody will want their piece of the pie. The giant problem is determining how big is the pie, how many slices are there available and how many people want to get fed.

Meanwhile, the spotlight on G2E used to be focused upon new technology involving slot machines.  With consumer demand rapidly decreasing in younger demographics, careful thought will have to planned on what will come to replace that void. Some say the inevitable growth and popularity of Esports. What we all can agree upon . . . people like wagering upon something exciting that they can talk about to other people. And increasingly, they are talking and betting upon it in their homes, cars and offices and less and less in casinos and mega-sportsbooks.