Betting the MLB Home Run Derby is another fun event, and a profitable one for the leading online sportsbooks. The house take percentage and margin for the bet is near 23% and rising. The odds drop on the players taking money in the derby, but don't rise enough on the other players. If you're making some win wagers on the event, or even on the head-to-head offerings, consider it entertainment value and risk.

I added some insight and odds on the Home Run Derby in my article at Forbes, noting too that the ball is clearly juiced and 2019 will produce a new home run record with 3,421 HR's hit at the halfway point on the way to the single-season record of 6,105 home runs hit in 2017. Both May (1,135) and June (1,142) set records for most home runs hit in a month, and there are 14 teams projected to set their franchise home run record. Can't blame all those home runs on the bad bullpens. Rather, MLB decided the equipment, or baseball, needed to be evaluated to add more 'juice' to the game.

BookMaker sportsbook has the following odds for the Home Run Derby participants, with the winner picking up a record $1 million. That's especially significant to five players (*) whose annual salary this year is less  than 650,000. Pederson ($5M) and Santana ($17M) are already highly-paid stars. Acuna ($1M) can double his 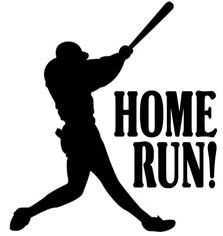 2019 salary with some strong swings and a Home Run Derby title.

Handicapping the event a little deeper and looking for an edge, I was provided some Exit Velocity stats from Analytics expert and MLB handicapper BaseWinner.

In the Home Run Derby, the players get to tee off against their selected soft-tosser. BaseWinner betting theory for this play is that the players in the contest who generate the best exit velocity on a changeup have an advantage. This is because the pitches in the HR Derby most resemble the changeup and the player will have to generate much of the exit velocity from his swing rather than the incoming ball speed.

In 2016, Giancarlo Stanton won the HR Derby. He had the highest year-to-date average Exit Velocity (EV) on line drives and fly balls when facing the changeup. 2018 HR Derby champion Bryce Harper was 2nd in the field, and 2017 winner Aaron Judge was fifth.

Perhaps that's why rookie Pete Alonso is taking some money, along with his sheer power. Alonso has hit 30 HRs, best in the derby field, but a MLB-best 20 of those have traveled 400+ feet.

Alonso leads all derby participants with an average Exit Velocity (EV) on changeups.

Is Josh Bell a false favorite? We'll find out soon, but left-handed sluggers may have an advantage at Progressive Field giving an edge to Bregman, Santana, Pederson and switch-hitting Bell. Just two rookie sluggers have advanced past the first round since 1991 with seven rookie participants making their Home Run Derby debut since then. One of those players, Joc Pederson, made the finals as a rookie in 2015 and he's my pick return to the finals with a solid shot to win the event and $1 million.