Money laundering in casinos is a global problem

Around two years ago the gambling industry was rocked by a report in the Vancouver Sun that alleged a major casino in a Vancouver suburb was laundering money.

Without going into great detail, in 2015 the Royal Canadian Mounted Police (RCMP) started investigating a money service company called Silver International and seized millions of dollars from the company along with computers, cell phones and any other evidence that implicated them in money laundering. In 2017 the RCMP laid charges against the owners of the company Caixuan Qin and Jian Jun Zhu charging them with money laundering and racketeering. According to the report Silver International paid for high roller Chinese nationals to come to Canada, pick up hockey bags full of $20 bills from someone associated with Silver International and then the nationals gambled with that money at casinos, and particularly River Rock Casino in B.C. The gamblers played almost exclusively in high roller, low risk baccarat games and when they had gambled enough (usually winning or losing a few dollars) they would cash out their chips and walk away from the casino with stacks of 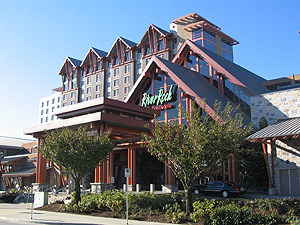 $100 bills and hand those back to Silver International who then deposited the new money in Chinese banks, thus completing the money laundering triad of placement, layering and integration all in one fell swoop. Unlike in the United States, gambling winnings in Canada are not taxed, so there was no need to sign forms or keep track of winnings as would be the case south of the border. The RCMP said Silver International got much of their funds from people involved in drug trafficking and other illicit activities in China and they claimed the company was also involved in loansharking, lending money at outrageous interest rates.

In February of this year, CTV News interviewed a whistle blower at River Rock casino who came to Canada from New Zealand and was hired as head of security for the casino. The whistle blower suspected something was fishy when he witnessed the huge deposits of bundles of $20 bills as well as the play of the Chinese Nationals, but when he told both the casino management and the government about his suspicions, he was effectively told to just ignore it. According to the report the casino and government feared that exposing the activities would severely affect profits at the casino and in government coffers.  And when the whistle blower wouldn’t let up, he was fired from his job. The full CTV report can be seen here.

While it was overwhelmingly obvious that Silver International was involved in money laundering, the prosecutors decided to stay the charges against Qin and Zhu in November for reasons undisclosed, although it is believed that the law in Canada doesn’t have a money laundering component in it that is sufficient to allow charges to stick, plus the RCMP information had details that if disclosed in courts would almost certainly lead to the murder of a police informant. The B.C. government was confronted by the media and the feds about the casino case as well as indications of money laundering in the area of real estate, but instead of trying to defend or refute the activities, held a press conference showing a chart which indicated that Alberta and Ontario were far worse than B.C. in that area. Ironically, Great Canadian Gaming which owns and operates the River Rock Casino won the bids to operate the two casinos in the Greater Toronto Area of Ontario. As a result of this whole mess, the U.S. Department of State earlier this year called Canada a major money laundering country and said its weak laws and inability to enforce the laws they do have makes them susceptible to influence from gangs and particularly Asian gangs.

The report listed Canada alongside the likes of Afghanistan, Colombia and China as major money laundering concerns. Canada disputed the claim and said they do have rigorous detection procedures in place, but the federal Liberal government proposed a new money laundering task force in the 2019 budget to create better anti-money laundering rules and cut down on real estate, casino and trade-based money laundering in the major cities.

The question that crossed my mind after reading the report and the U.S. response was whether Canada was really much worse than the U.S. in the area of money laundering via casino gambling and whether the United States was a nation that should be looked upon to prevent money laundering from taking place. I asked a friend who worked as a security manager at a Las Vegas casino his opinion and he agreed to answer, provided he could remain anonymous for obvious reasons. I’ll refer to him as J.P. in this article.

"To think there is no money laundering in U.S. casinos is a joke", J.P. told me. "Any industry that deals with large amounts of cash will be susceptible to money laundering. The rules against money laundering are fairly clear. Any single transaction over $10,000 will be investigated as will multiple transactions in a 24-hour period that exceeds that amount. $10,000 is also a key number since any wins over that amount will result in wins being withheld for non-U.S. citizens and tax forms being signed by residents. So many casino patrons including those who live in the U.S. will wager "to the limit" but make sure it's under that amount. I will never forget one day when an Asian woman came to a baccarat table and put down $5,000. She won, took the money which was just under $10,000 and left. Another Chinese woman who looked almost identical, but in a different outfit sat down later and put down $5,000 on baccarat, won and did the same thing as the first woman. This happened all day with multiple Chinese women and men who only played baccarat and blackjack. It was obvious that some of these "different people" were the same ones in different outfits and wigs, but no one wanted to confront them for fear of being called racist and because legally they were doing nothing wrong. Unless we could prove 100% it was the same person there was no way we could charge or investigate them. Often times I would indicate my concern about something unusual that was happening, but more times than not managers would tell me to just look the other way and I got the message loud and clear. And I worked in Las Vegas where we are scrutinized very closely. In Indian casinos everyone knows there is tons of money laundering happening daily, but the tribes want their cash and even when people win over $10,000, they often will look the other way. And we won’t even talk about horse racing tracks. It’s just the nature of the business. When you deal with money it is just too difficult to trace the origins. When someone puts money in a Christmas bubble, the bell ringer will just smile and say thank you. They don’t care if it came from a drug deal or another forbidden activity and unfortunately it’s true with most casinos."

I decided to look at the United Kingdom as well, which is still seen as having the most stringent gambling rules to see what they do to address money laundering. It appears the UK Gambling Commission rules tells the casinos to report any suspicious activity regardless of the amount and asks for a risk based approach to identify any possible terrorist financing. But like Canada there is no specific method to identify money laundering and no clear set penalty for allowing suspicious funding to go through. The full UKGC rules on money laundering can be found here.

Some companies have tried to implement methods to stop money laundering in casinos. FinScan, for example is used by many casinos worldwide and requires several validations to prove the source of deposits. FinScan checks IDs and uses facial recognition software to make sure that the person on the ID is not on any watch lists, any self-exclusion lists or is linked to any terrorism. It works well and according to the FinScan site, Canadian casinos are using the product. The problem, of course, is that it can only identify known criminals, so anyone involved as a third person to money laundering, as was the case in the Silver International scandal, would not be identified. And Silver International always stayed one step ahead, as they would change out the Chinese national gamblers frequently to avoid detection. As well, there apparently is not much interest for something like FinScan particularly at Indian casinos because many casino owners believe that anonymity is paramount to casino success and if patrons felt they were being watched and monitored they wouldn’t go to the casino. "There’s a good reason high rollers and native Americans don't want those casino reward cards," J.P. said to me. "A perk isn’t always worth the risk of being on a government watch list."

Almost every analyst I spoke to agrees that the best way to prevent money laundering is with online gambling. Unlike in casinos, one can’t simply deposit and withdraw cash. The transaction has to go through a payment processor (even if it’s not a bank directly) and consequently if there is anything suspicious the money trail can trace it back to the depositor. That is why gangs don’t wager online unless they can do so under the radar. Obviously virtual currency poses a different threat, but for normal transactions that involve the transfer of fiat currency, online gambling provides the least likelihood for money laundering.

There have been several high profile fines issued to casino operators for money laundering in the last decade including a fine by FinCen against the Trump Taj Mahal in New Jersey for "significant money laundering" in 0215, two fines against the Las Vegas Sands for different money laundering offenses, one fine against Caesars for money laundering and a charge against 21 individuals in a multi-state sting, where individuals used stolen account numbers and counterfeit credit cards to get cash withdrawals at MGM and Caesars casinos in Nevada. But when I pointed that out to J.P. he laughed, called it a drop in the bucket and said that these arrests and fines are done for show but for every $1 of money that is found to be from illicit means there is $1000 that is not found. He also said the Indian casinos are really the biggest concerns for money laundering, but one that the feds don’t want to touch with a 10-foot pole.