Whether to pay or not to pay an integrity fee is being debated in states throughout the U.S., but New York has a solid approach that just may work for everyone.

Each state is viewing the leagues' request for a fee differently

One of the most controversial topics on legalized sports betting has been the request by leagues for a 1% integrity fee. This fee would be given to the league on every single bet placed and most analysts have equated it to 20% of gross revenues. NBA Commissioner Adam Silver was the first league person to ask for the fee, although it was later supported by MLB as well. In a press conference in early February Silver suggested that the leagues deserved the fee effectively as a royalty for owning the sports:

"I would only say that from the NBA’s standpoint we will spend this year roughly $7.5 billion creating this content, creating these games. Those are the total expenses for the season. So this notion that as the intellectual property creators that we should receive a 1% fee seems very fair to me."

"The sportsbooks monitor activity, highlight anything suspicious and report findings. "

The number $7.5 billion has been questioned by most analysts as unrealistic and the majority feel the amount has nothing to do with maintaining integrity and is just an overall expenditure for the league. They simply want the states to pay those expenses to fatten the owners' wallets.  In fact, many analysts that have looked at the situation in Europe, and particularly the UK, maintain that the majority of the work done in ensuring integrity is the sportsbooks themselves. The sportsbooks monitor activity, highlight anything suspicious and report findings to the leagues. And the books are the ones that have put in the rules and efforts to ensure that underage and problem gamblers are stopped from betting, that anti-money laundering provisions are followed, and when need be, they are the ones that go to the courts to prosecute individuals whenever anything untoward happens in the placing of bets.

Nevertheless some states such as Missouri, Indiana and Illinois seem all but prepared to pay the 1% fee, while other states like Connecticut, New Jersey and Pennsylvania seem very reluctant. Nevada has never paid anything to leagues for offering betting on their sports, and many state legislators believe it’s a sham.  New Jersey Senator Steve Sweeney even called the idea of an integrity fee 'extortion' in a Senate meeting and has urged all states to reject it.

"Essentially, the leagues are asking to be paid to allow games to be played fairly," Sweeney wrote. "Ironically, they are calling this extortion attempt an 'integrity fee,' even while fully aware that providing participants a stake in the volume of betting would amount to what could more accurately be called an 'anti-integrity fee.'"

"And their demand begs the question of what they would now start doing to preserve the integrity of their games that they have not been doing for years."

Major League Baseball responded to an AP request to explain what they will do exactly to promote integrity with the following:

"We will use our expertise, rights and footprint to help the states that have smart and modern sports betting laws develop the country's most successful betting markets within a regulatory framework that protects the integrity of our games, which is most paramount."

Obviously, MLB's response is vague, but chances are they have no idea what they are going to do, so this was essentially a response of 'show us the money' and we'll deal with the specifics later. More importantly, it is doubtful that many states will want the leagues to help them with a regulatory framework. States already have an idea of what they want to offer and how they want to offer it and would likely see any league input as irrelevant and possibly even a hindrance. 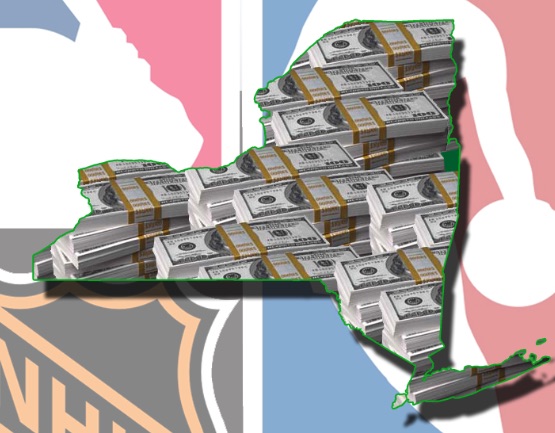 Sweeney's response is unquestionably predicated on the leagues fight with the state on sports betting for years, which has cost New Jersey over $10 million in court costs. And, he likely blames the leagues for the fact that they have been prohibited from enacting the law as they saw fit after it passed a state referendum by a 3-2 margin. Truthfully, even in the most recent SCOTUS hearing all the leagues were represented by lawyers who were urging the courts to prohibit sports betting going forward.

But the question still remains whether the fee is justified.

The integrity fee will cut deeply into profits, which means some sportsbooks may feel the need to offset the loss with higher holds, which will only hurt the bettors in the long run. But, it's also true that the leagues shouldn't have to absorb extra costs that will be thrust upon them with the SCOTUS decision. For that reason, the one state that seems to have it right is New York.

Originally New York seemed prepared to offer a reduced integrity fee to the leagues of 0.25% which equates to roughly 5% of profits with no strings attached, but a last-minute amendment to the Senate bill introduced by John Bonacic (called S7900C) cut the fee to 0.2% and they told the leagues to prove that this money is going to be used for the purpose the leagues say it is intended. The bill will likely be introduced in the House by Gary Petlow.

Analysts I spoke to seem to believe this is the way all states should act and the reaction by the leagues will be telling how sincere they are. One analyst based in Western New York was quite explicit:

"What exactly will the leagues be doing over and above what they currently are to promote integrity? And I mean truly incremental actions. If the NBA is going to say something like 'we will work to make sure that league officials aren't wagering on games in light of the Ted Donaghy scandal', it's meaningless. If, on the other hand, they say something like 'we will be implementing a new department whose mandate it is to do investigative work and possibly sting operations to make sure that states do not have any cracks or loopholes that will allow officials to wager. And we estimate it will cost about $20 million a year to run this department' (and show the breakdown of the costs), then that is meaningful. But my hunch is the leagues will just be vague because they don't have a clue of what they will do and more importantly they don't want to expose possible means of cheating and corruption that has occurred on their watch and which will indicate what a poor job they have done to date. Nobody wants to be exposed as uncaring and incompetent."

And most of the other analysts I spoke to seemed to concur and have noted that the leagues just want a cut of the action. They also agree that had the leagues not fought New Jersey tooth and nail, they may have received it. Five years ago saying something like "ok we'll support your efforts and will even back your claims for legal sports betting to the courts, but we want our slice of the pie," likely would have been met with reluctant approval and just been chalked up to a cost of doing business – just as DFS sites have done in return for league approval. But trying to justify a piece of the action now that the courts have ruled against the leagues won't fly. It's the same as someone who was offered $400,00 before the housing crash saying "ok I'll take that now" after their house was devalued to $215,000 following the recession. Decisions are made on the current situation and the current situation is that there is no incentive nor reason for states to give the leagues money, unless it is truly going to be used for the purpose they deem intended.

So, the question of integrity fees has reared its ugly head once again. Do leagues deserve it? Maybe, but as New York has effectively said – if you want us to pay you, give us a concrete reason of what you and this fee will be doing to promote integrity, with numbers to back it up.