OSGA football contests return with $1000's up for grabs!

For the 14th year in a row OSGA is offering contest for the pro football season. This year the Progressive Pick 'Em features a huge cash jackpot and weekly sports book free plays. And OSGA Members will have a shot at seeing who can be the Last Member Standing.

NO SPREADS, NO POINTS, JUST WINNERS! This is 2 contests in 1 and gives the season player a shot at a big pot and the casual player a chance for a weekly prize. Both parts of the contest are FREE to enter! 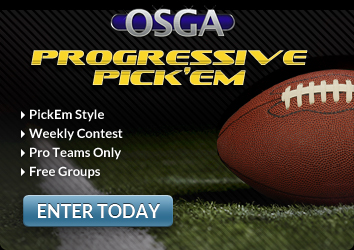 Weekly players just choose a winner for ALL the games that week. This part of the contest runs week by week. Players can enter at the beginning of any week and each week is a contest in itself. Pick the most correct winners AND YOU WIN! It's that easy! The top score each week gets a $200 Free Play at WagerWeb.

The second contest is a progressive season-long event. (Players must register BEFORE the first Sunday of NFL action on September 8).

Players who participate in the weekly contest will be eligible for a PROGRESSIVE JACKPOT that is available for the player(s) who guess ALL the games correctly in one week. If NO player gets all the games correct, the prize rolls into the next week, adding up until someone hits. When a player wins ALL the games in any individual week, he collects the entire pot at that time.

At the conclusion of the NFL season, the remaining money in the progressive jackpot will be split among the players who have the most overall winners during the season. If no one hits the $100 weekly prize, this prize pot could be up to $1700!

Get on board today. Click here to sign-up and make your first week's selections. Registration is only open until Sunday, September 8th .

Last year was the first time in nearly a decade that we did not run a Survivor pool for pro football, so this year, we're bringing it back exclusively for OSGA members.

This contest features a cash jackpot that grows each week. Members should be rewarded with continuing to make great picks so the prize pool increases every week you stay alive!! Players who make it to the end of the season will be making a winner-take-all pick for $1500 in week 17!

But we also want to reward members who get deep into the contest as well. So, we've added a runners-up pool where place two through four share a pot of up to $350 cash.

OSGA Members should take advantage of this exclusive contest. Members can sign-in to find out who can be the Last Member Standing.