The 2021 college basketball title game is on tap, and the match-up is set between top seeds Gonzaga and Baylor. Plenty of articles, videos and opinions covering the match-ups and breakdowns, and leading online sportsbook BetOnline reporter Dave Mason noted that early action was nearly split with 52% of the spread money (handle) on Gonzaga -4.5. More bettors are taking the over 159 with greater than 70% of the money expecting a high scoring game. However, the total has dipped down slightly, as has the moneyline on Gonzaga to win the game; now -195.


BetOnline has the Most Outstanding Player award prop and odds down to two favored Gonzaga players: Drew Timme (+100), and Jalen Suggs (+110). If Baylor wins, Davion Mitchell (+500) and Jared Butler (+600) may prove to be the best plays at 5-6 times greater odds.

In looking at other picks, players and props for the national championship game, I made a play on Gonzaga senior guard Joel Ayayi to make more than 1.5 three pointers. You can review more of the analysis in my article and Championship game update at Forbes. Feeling is more attention on Suggs, and Ayayi is going to go out shooting in his final collegiate game. Ayayi may well go over his over/under of 13.5 points as well if he hits a few 3's as anticipated, but money has come in a bit on the Under for that prop.

I don’t have a bet on side or total yet, and this may be a game to get more involved on in-play wagering as you see how the teams come out early. I favor a first half Under with Gonzaga off the thrilling and emotional buzzer-beater bank shot by Jalen Suggs. 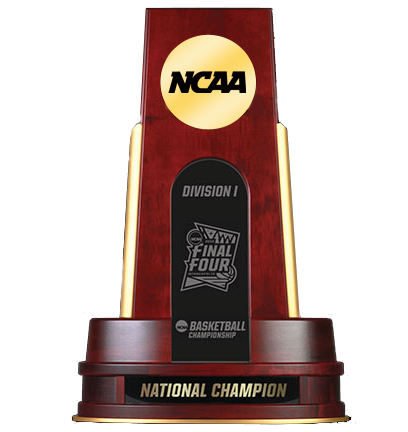 The keys to NCAA Tournament success have been strong and on display for these two high-scoring teams. The recent history of No. 1 seeds has continued for these two teams since reaching the Sweet 16. Gonzaga can now become the first college basketball team to go undefeated and win the national title since the 1975-76 Indiana Hoosiers under coach Bob Knight.

Can the Bears contain Gonzaga's most efficient high-scoring offensive attack and strong shooting? Will the Zags be less efficient off their toughest test of the season and emotional win over UCLA?

Here is a little deep dive into championship scoring when two high-scoring teams meet, and average at least 80 points per game.

So the small sample size history suggests these teams won't reach their scoring averages with it all on the line in the Championship game.

Gonzaga has been the most consistent and best team this season with Baylor right behind. The Bulldogs took their heavy punches from UCLA, which many championship teams do at one point during the NCAA Tournament. Watch history tonight as Gonzaga completes and undefeated and unblemished season as the 2021 college basketball national champion.

FairwayJay is a proven sports handicapper and is recognized as one of the sports industry's most insightful analysts. Read more great insights from Jay here and follow him on Twitter: @FairwayJay