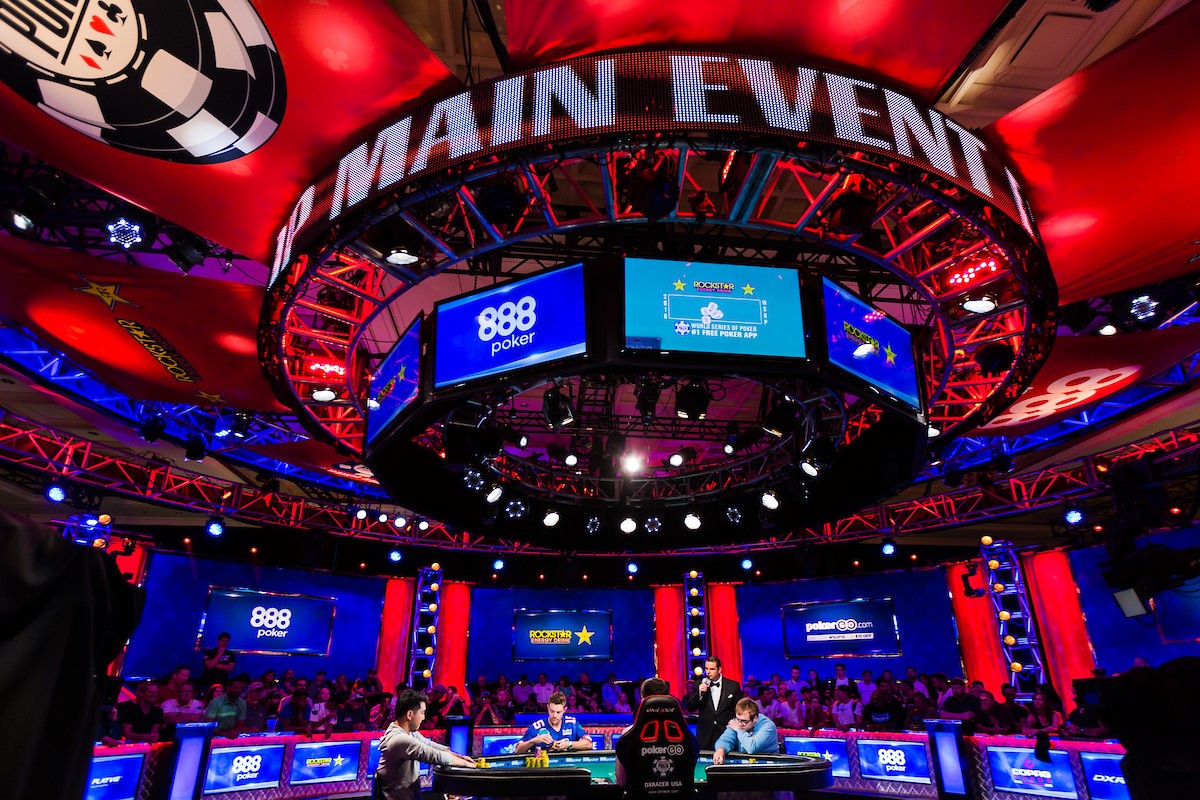 FairwayJay has been covering the 2019 World Series of Poker and provides some insight on the Main Event Final Table and participants.

The World Series of Poker Final Table is set. The remaining 9 players are guaranteed to receive at least $1 million, and the WSOP champion will receive a cool $10 million.

The $10,000 buy-in No-Limit Hold 'em Championship drew a field of 8,569 participants from 87 different nations. It represented the second largest Main Event ever and just 204 players shorts of the record set in 2006. A total of 1,286 players (15% of field) made the money, and the field was whittled down to 354 players to start Day 5 and 132 at the start of Day 6 of the Main Event when a massive pot sent high-stakes Canadian poker pro Sam Greenwood to the rail with his pocket aces (AA). Amateur poker player Timothy Su, with just a few thousand dollars in live tournament winnings and the chip lead in the tournament, made a move at the pot and moved all-in on the turn with an open-ended straight draw. He found himself a greater than 4-1 underdog when Greenwood made the call, but Su hit the straight on the river. Su is one of the remaining players at the Final Table.

As Day 7 started, just 35 players remained. Now the dream of a WSOP Main Event final table has been realized for the nine remaining players. One of them will become World Champion and $10 million richer.

Live from Las Vegas, ESPN carries the coverage July 14-16. Action is on a 30-minute delay to conform to gaming regulations.

Here are the chip counts and player profiles. 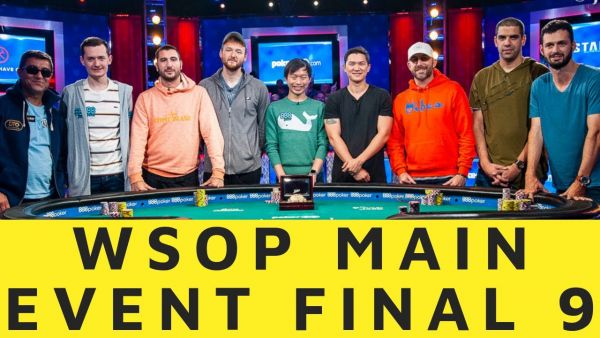 More WSOP coverage from Poker Central and PokerGo. Click on each players name to get more Poker News about their Main Event story and key hands.

Hossein Ensan is a 55-year-old Iranian-German poker pro who has enjoyed increasing success on the global poker scene in recent years. Ensan emigrated from his native Iran to Germany in 1990 and began traveling and competing in poker tournaments around 2004, though it wasn't until 2013 that he began booking significant cashes. He still describes himself as a poker amateur, just as he once described himself as a “simple painter,” his former occupation, following his breakthrough performances earlier this decade. Ensan has one daughter and travels frequently to his native Iran. Ensan's career-best performance is a victory for €754,510, worth about US $825,000. Also of note is Ensan's win at the 2017-18 WSOP International Circuit stop at Kings Casino in Rozvadov, Czech Republic, where he topped a 672-entry main event field to collect €184,812, about US $220,000.

Nick Marchington is a 21-year old poker professional who dropped out of college where he was pursuing a Computer Science degree. He has one recorded tournament cash. It’s from the $800 No-Limit Hold’em Deepstack event earlier this summer at the WSOP. He finished in 18th place, earning $12,415.  He is from Hornchurch, Essex in the United Kingdom and currently lives in London. His favorite football team is West Ham United.

Dario Sammartino is a 32-year old poker professional with $3,446,357 in career WSOP tournament winnings. He has 38 WSOP cashes, his biggest cash coming from the $111,111 High Roller for One Drop in 2017. He won $1,608,295.  He has three third place finishes in WSOP events and his best Main Event finish was in 2017, when he finished 43rd. He learned poker after his grandfather passed away. His father taught him as a way to help him cope with the loss. He is a former Starcraft player and a regular on the poker high-roller scene.

Chicago's Kevin Maahs is a 27-year-old relatively new player on the WSOP scene, but he's making a big imprint on the Series in one of his first poker trips to Las Vegas. The 27-year-old Maahs had logged only one prior WSOP cash before his deep run here, a 169th-place finish for $1,230 in a big-field, multi-flight WSOP Circuit Horseshoe Hammond (Indiana) event in February 2019. Maahs, though, is an increasing poker presence on the Midwest poker scene, having logged a live-career best $20,625 cash last September.

Timothy Su is a 25 year old software engineer from Boston, MA. Before this year’s WSOP, Su had two cashes for $1,540. This is his first Main Event and he was the chip leader of his Day 2 flight as well as at the end of Day 5. Originally from Allentown, PA, Su is a fan of Philadelphia sports teams. He is currently working as part of a 15-person startup in Boston called Canopy. He plays three instruments, the piano, the violin, and the oboe. He loves Tchaikovsky and enjoys playing classical music. Su said, “there are a lot of parallels between music, poker and software in terms of taking liberties in choosing what you think is correct.” He says his proudest moment is completing a 100-mile bike ride.

Florida's Zhen Cai is a full-time pot-limit Omaha cash-game pro who only occasionally finds time to participate in tournaments, though his 2019 run may change that. Cai, a former casino employee, is usually found in Florida's plentiful cardrooms, though he makes occasional poker trips elsewhere, such as the WSOP. The 35-year-old Cai, a resident of Lake Worth, Florida, has logged occasional WSOP cashes dating all the way back to 2010. Cai is also a WSOP Circuit ring winner, having won Event #5: $565 No-Limit Hold'em, at the 2010-11 WSOP Circuit Regional Championship at Harrah's New Orleans (Louisiana). That effort was worth $33,753, second among all his live cashes. Cai has also received mentoring from his good friend, Tony Miles, who finished second in the WSOP Main Event in 2018.

Poker-industry veteran Garry Gates has enjoyed increasing success on the felt in addition to his regular behind-the-tables career. Gates began in poker as a live reporter, quickly advanced to becoming a live-reporting manager, and for the past several years has worked as an events manager and senior consultant for player affairs for an online poker site. The 37-year-old Gates lives in Henderson, Nevada when not traveling the globe. Gates is also a survivor of the horrific 2017 mass shooting in Las Vegas in which 58 other concert-goers lost their lives.

Gates, a native of Titusville, Pennsylvania, has participated in the Main Event for the past decade, having made the money in both 2011 and 2017. The 2011 cash was for a 170th-place effort worth $47,107. Most of his career cashes have come in WSOP or WSOP Circuit events, with his prior career-best payday, $64,530, earned with a fourth-place finish in Circuit event in Atlantic City in 2012.

Serbia's Milos Skrbic is a relative newcomer to the WSOP but has left his mark on the global live-poker scene in recent months. The 30-year-old Skrbic, who lives in Sremska Mitrovica in northwestern Serbia, has earned over $1.6 million in live poker tournaments. The vast majority of that total has come in 2018 and 2019. Skrbic broke through in a major way when he placed fifth in the Main Event at the 2018 World Series of Poker Europe, earning €241,718 (USD 275,054). He then earned his first seven-figure score later that year.

Canada's Alex Livingston is a full-time poker pro who splits his time between his native Halifax, Nova Scotia, and Las Vegas. The 32-year-old Livingston has made a deep run in the Main Event before, having finished 13th in the 2013 Main for a live-career best $451,398. This former chess champion learned poker as many do, via games with friends. He attended Tufts University in Boston, and he later acquired a pizzeria in North Brooklyn, part of New York City. Livingston, also enjoys golf and bowling and is a big fan of NBA basketball. The 32-year-old Livingston has participated at the WSOP since his early 20's and continues to proudly represent his native Canada at the tables.

Germany's Robert Heidorn was eliminated in 10th place at the unofficial final table on Friday that ended at 2am PT Saturday. He moved all-in from middle position with his remaining $9.1 million chips holding the K-Q of hearts. Alex Livingston made the call with pocket eights (88), which held up. Heidorn picked up $800,000 on his way out the door at the Rio All-Suite Hotel & Casino.

Prize money for the remaining nine spots is as follows:

The 2019 Main Event was part of what is going to go down as the largest-ever WSOP in terms of entrants in the 50-year history of the event. With five events remaining, a total of 181,458 players have thus far entered the events on this summer’s WSOP schedule, generating a total prize pool of $282,370,095.