FairwayJay reached out to leading online sportsbooks to discuss the NFL's increased scoring and how the sportsbooks are adjusting to record scoring in 2020.

The scoring surge continued in Week 5 of NFL action and for the fourth straight week NFL games averaged more than 51 points per game. The record scoring has seen significant adjustments made by the sportsbooks to level off the OVERS that were hitting at better than a 60% rate through the first three weeks. For the season, NFL games are averaging 51.3 points per game with 3,900 points scored through 76 contests. The OVERS have cashed in 42 of 76 contests (55%) with a few pushes and closing totals affecting documented over/under results. Week 4 saw over/unders go 7-8 and Week 5 totals are 6-7 with Tuesday's Bills/Titans game pending.

While the sample size is small and statistical extremes often regress back to the mean, it appears a record year in scoring is going to continue in 2020. The average NFL closing total has increased each week in 2020 starting at 45.5 in Week 1 with 2-point increases in a few weeks to reach 49.0 in Week 4 and 50.0 in Week 5 using the Bills-Titans total of 53. 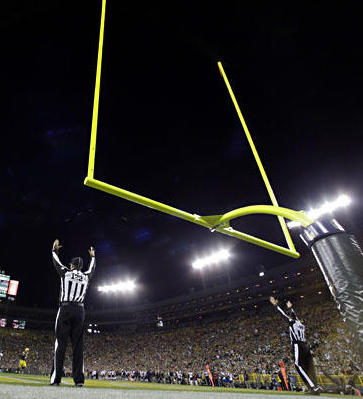 Inflated totals have not slowed down bettors counting on more offense and flying footballs with rules changes benefitting the offenses. While fewer holding calls have had an impact on offensive production and scoring, there are other factors including fewer if any fans in the stands in an unprecedented NFL season and year in sports.

I reached out to some leading online sportsbooks for their thoughts, opinions and insight on the scoring and adjustments being made.

Heritage sports is one of the pioneers in online gambling and offers cash back, reduced juice and an extensive live wagering menu. Management at Heritage Sports said they believe "the lack of crowds and missed preseason have affected scoring. It seems like the offenses are running down hill and its taking some time for defenses to catch up and find their own motivations. I think the drop in penalties is likewise affected."

Feeling is with little or no fan influences, referees are calling the game with more focus on the play and less on the environment.

Q: How has increased scoring impacted over/unders and posting? Specifically, after Week 2 scoring was 53.3 PPG and totals and Week 3 at 52.2 PPG?

Totals got hammered in the first 3 weeks and coupled with teasers, they seemed to be gimmies. We saw a turn Week 4 with some lower scored games in the afternoon contests. Then in Week 5 the Bears/Bucs game came in under 40 points and five of the early Sunday games were lower scoring to help us. But scoring exploded again with some late games including the Cowboys/Giants game which saw QB Dak Prescott go down for the season with an ankle injury. The Sunday night Vikings/Seahawks game held on to stay under after it was 13-0 at halftime, but the Monday night Saints/Chargers game got over the total with three touchdowns in the fourth quarter and then a Saints overtime win. I think some of the lower scoring games the last two weeks is a result of defenses catching up and some games have more implications and motivations as teams position themselves in the standings.

Q: What is approx. percentage of over/under bets on typical NFL Sunday, and prime time games?

Approximately 25% of our handle is typically on totals.

Opening lines will always adjust based on data, teams and trends. I think we saw that in week 4 where there were adjustments based on the previous 3 week trend. Week 4 results will just add to the data set and will be considered in Week 5 and others.

Should be no surprise that high octane teams like KC, Baltimore, Dallas (bad defense too) probably have seen their totals bet higher. Inept offensive teams like the Jets and Washington totals tend open up lower.

Q: What promotions is your sportsbook offering regarding NFL or totals?

We have extensive point buying or selling available on all games, so customers can find any total on any game. It allows them to build their own teasers or parlays at the number they want.

The forward thinking and customer service has allowed My Bookie to become a player favorite in just six years of online wagering.

Q: How has increased scoring impacted over/unders and posting?

There were 7 games in Week 5 with totals 50 points or larger. I'm old enough to remember the times when a 49.5 Total was a rarirty. The market has adjusted, as it always does, to the increase in scoring. I do wonder what will happen when fans return to the games, will the totals fall as well? The 28% drop in flags tells me the fans clearly have an effect on penalties such as delay of game, illegal formation, offsides and any other penalty that requires good communication before the ball is snapped. Perhaps home field advantage is a thing, despite all the naysayers to the contrary (myself included).

Q: What is approx. percentage of over/under bets on typical NFL Sunday, and prime time games? And compared to side bets and moneylines?

Roughly 75% of the money bet on NFL totals this year has come in on the over. While the action does not compare to the spread it is easily defeating the moneyline, which is easy to understand when you consider over bets apparently do not lose.

We are doing our best to stay on the high side of the market for totals, not that the strategy helps when you're losing the under by 3 touchdowns.

The Browns and Cowboys are the clear leaders in terms of adjustment due to offensive scoring and a lack of defense thus far.  The Seahawks and Bills are up based on Offense. The Jets, Texans, Falcons and Lions have seen totals in games they play in trend upward due to their inability to prevent the other team from scoring at will.

Q: What promotions is your sportsbook offering regarding NFL or totals, and plans related to scoring boosts or other over/under props or player and yardage props?

We have a great promotion for NFL Totals, available to all players new and old. Simply parlay a few NFL overs on Sunday and await your profits, it's (apparently) as easy as that. Otherwise we'll be celebrating the return of Big Ten Football in the coming weeks and then it's on to November where we'll have our $250 No Risk Thanksgiving Straight Bet.  We have great promos popping up on the site weekly, but you'll have to be logged in to catch them.

Jazz Sports is another storied sportsbook operation which has grown with innovation and provides live wagering and live game streaming. Jazz provided their thoughts on increased scoring and bookmaker adjustments in 2020 and the NFL season.

Q: How has increased scoring impacted over/unders and posting?

Scoring is up for a few reasons and it is always high early in the season. The NFL refs have been calling less holding penalties which leads to QB's having more time in the pocket which leads to more plays downfield. Remember this is Week 5 which for referees is the first week of the regular season and they always call the exhibition games really light to keep them moving and to allow players to adapt to new rules interpretations. I believe they are allowing time for teams to "get in the groove" before they start going flag crazy.  Sometimes this cause high scoring like when they called Pass Interference on nearly every play. Also there has been NO weather in the US which means great playing conditions for quarterbacks to throw. Weather, injuries, and zebras affect scoring more than anything else.

The starting line usually comes from Vegas (no matter what CRIS or BOL says) and then sharp money moves the lines. What has been occurring is that the public has been crushing the sharp guys. Where the books are getting killed is favorite and OVER parlay/teasers. Currently 57% of all teasers are favorite and over and I believe in Week 2 the 10am games every Favorite/Over teaser was a winner. This also affects favorite/Over parlays which have also been winning at an abnormally high rate.

Q: What is approx. percentage of over/under bets on typical NFL Sunday, and prime time games? And compared to side bets and moneylines?

Over/under wagers make up 30% of a Prime Time Game Prematch wagers on the GAME only Moneyline 4%. Sides 66%.

Once a line is posted, the smart money will move the line. When bookmakers start putting their opinion in the lines then they are gambling. While Jazz does NOT ever balance a game we do move based on sharp players which means if the public continually bets a game over 56 it may eventually get to 57 where a sharp guy would take under 57 and cause the line to go to 56.6.

Green Bay, New Orleans, Kansas City, and Baltimore are always teams that the public bets the totals OVER. There are no teams that players regularly bet UNDER but the Jets and Dolphins are teams that sharp guys will always bet UNDER if the total drifts up.

That's it for the sportsbook betting insights. Be sure to check the betting scene for more sports betting and sportsbook news and information you can bet on.

FairwayJay is a leading national sports handicapper and betting analyst, and is recognized as one of the sports industry's most insightful analysts. Read more great insights from Jay here and follow him on Twitter @FairwayJay